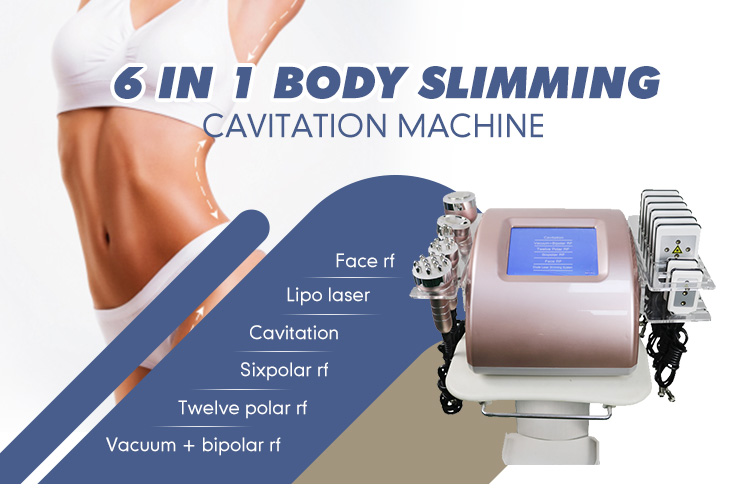 Effective strong sound wave head, strong sound wave of 40000HZ may be emitted to vibrate fat cells at top speed and produce numerous vacuum air pockets inside and outside the fat cells, robustly impact fat cel s to generate introverted blast and disintegrate triglyceride into glycerol and free fatty acids. Then RF waves at frequency of 1M HZ is used for exhausting the integrated glycerol and free fatty acids through hepatoenteral circulation. Finally, vacuum RF and energy electrode are used for positioning and tightening fat. In physics, it is known as "cavitation". Micropore introverted blast inside and outside cell may lead to enhanced molecular motion and a higher energy level and this will final y cause fat cell rupture and thereby achieve the effects of body building and losing weight. 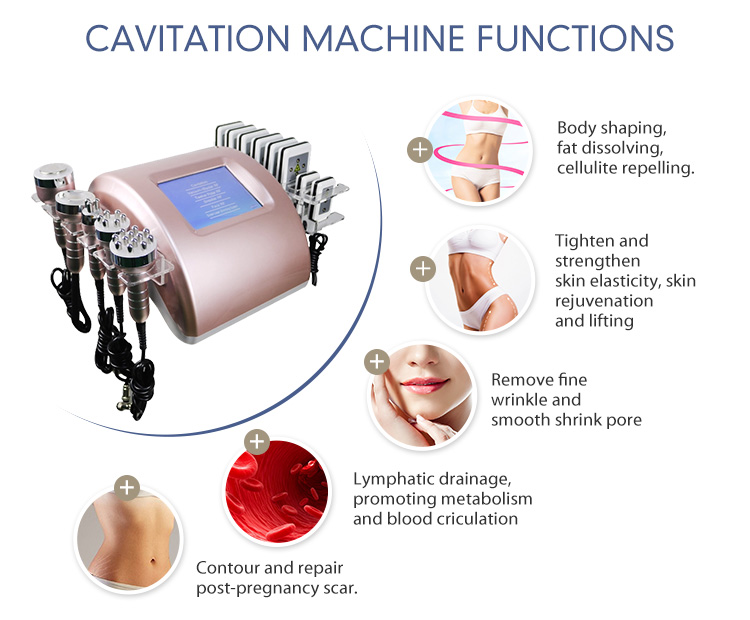 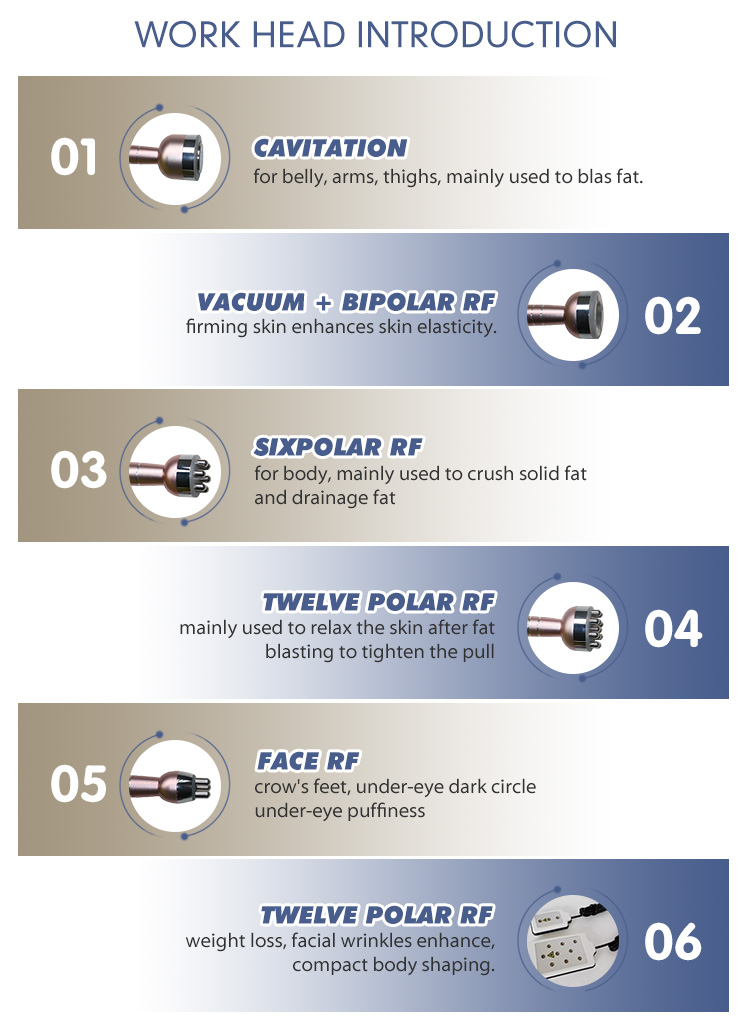 liposuction head Being integrated with the most advanced RF technology and radio frequency,

the instrument may directly each the deep-seated fat body and have the excellence of targeted positioning RF. In the fast-active state, fat cell tissue may generate friction heat, increase local temperature and remove excess fat and toxin from the body through sweat gland, enteropathy circulation and lymph and ultimately achieve the effect of dissolving fat.With controlled depth technology, inlaid diamond particles of different sizes may rub skin along its pattern, adjust suction strength by means of vacuum draw and rub with negative pressure strong force to directly explode thick fat. Thus, the effects are very obvious:Enhance blood circulation, accelerate the decomposition of fat, take away wastes, enhance the effect of removing cellulite, effectively improve the state of areolar tissue,remove stubborn fat and improve the sufficient absorption condition of diet products.

For body and face re-shaping.Weight loss Vaccum+RF fat-explosion machine can promote tissue metabolism,repel the cellulite, which make fat granule in different depths and shocking make fusion energy, and the deepest receptor can get granule in 3CM thick of skin, and rapid expansion and the rapid heating of the cell wall that exceed the elastic limits and arises cells broken, so that the combustion of fatty acids at the same time broken out of a pot, not only the burning consumption of fatty acids but also more directly emptying so rapidly reduce the size of granule

Facial RF head A capacitive coupling electrode is used for transmitting radio-wave energy
and generating an electric field for entering into subcutaneous tissue through the skin
surface. In the high-frequency of 450khz, this electric field changes its polarity for 450,000
times per second.To reply to the rapid change in electrode, directions of electrical particles
the skin are also changed. By this time, natural electric resistance in the subcutaneous tissue moves and generates heat energy. As thepapillary dermis collagen may immediately shrink when the temperature is within the range from 60 to 70 Celcius degree, after wrinkle treatment, client may immediately sense the skin tightening effects as it is being lifted and firmed. When collagen is produced continuously, thickness and density of the skin papillary dermis may be increased to remove wrinkles, eliminate scars, restore skin elasticity and gloss and make it be blonde and smooth. While collagen is increased, fresh skin is generated in the position of operation and wrinkles are removed by large amount of cells. In addition, when cortex without elasticity or that with thick horny
layer in the area with wrinkles is separated, surrounding skin will also be renewed . 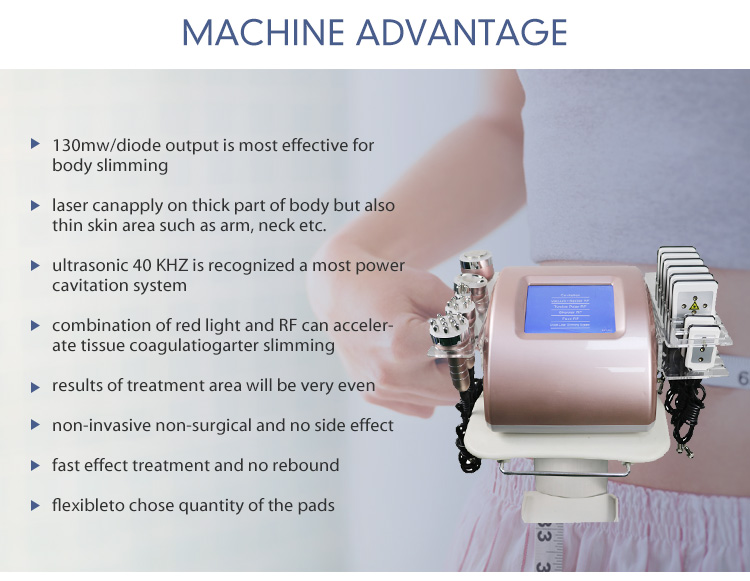 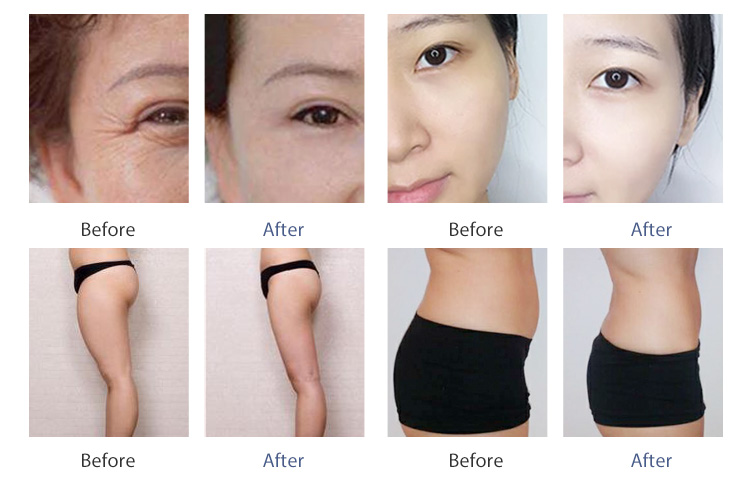 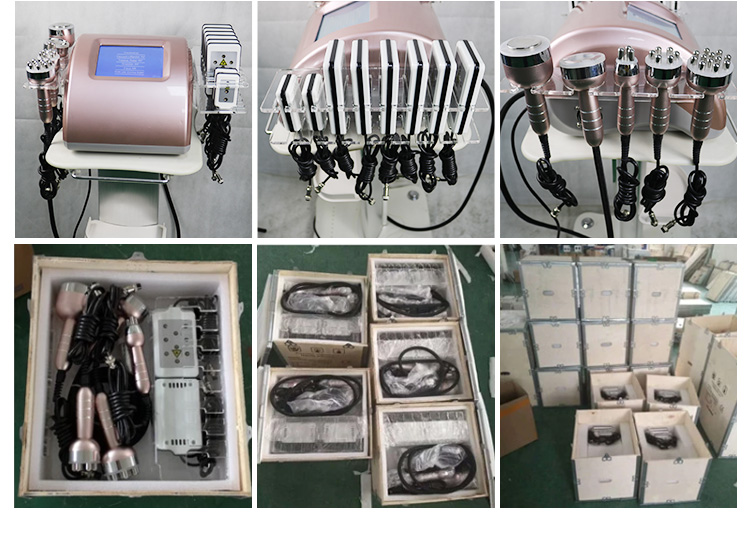 welcome your inquiry and order, we will be sure excellent quality
+8615227306803
 beautitown.med@gmail.com

www.beautitown.com
we will do our best effort to meet the customer's requirement